By CCN Correspondent in Gweru

The Zimbabwe Catholic Bishops’ Conference (ZCBC)’Chairman for Caritas, Archbishop Alex Thomas of the Archdiocese of Bulawayo called the Church to go green and to adopt measures that reduce the effects of climate change. He said this in Gweru during the celebrations to mark the 5th anniversary since Pope Francis promulgated Laudato Si for integral ecology.

All Caritas Coordinators and Project Managers from the country’s eight dioceses  converged to pray and prepare for a better future  reflecting on Pope Francis invitation to recognise the 16-24 May Laudato Si’ Week which extends into a  year-long journey of transformation declared a  Special “Laudato Si” Anniversary Year, running to May 24, 2021.

The two-day event started with a key note address from the Caritas Bishop Chairman who unpacked key issues of reflection and insights from the Laudato Si encyclical. The address was followed by sharing from various dioceses on how they were responding to the Holy Father’s call on the care for the environment.

Since May 24, 2015, when Pope Francis signed his landmark encyclical, Caritas Work in Zimbabwe has been responsive to the encyclical in various ways. Amongst projects shared by the eight dioceses were the establishment of the agro ecology learning centres, establishment of small grain seed banks, conservation agriculture and planting of trees.

Farmers have started to adopt Climate change adaptive strategies, that include among others sustainable and conservation farming techniques that embrace in-field water harvesting and soil conservation technologies. Caritas Zimbabwe promotes natural soil fertility management and natural pest and disease management as an alternative to the use of synthetic fertilisers and pesticides. Communities have also adopted low fuel consumption stove popularised as “tsotso” stove,“tsotso” meaning the naturally dried small tree brunches or wood chips or offcuts that burn quickly as compared to cutting trees for energy.

The two-day event was capped by the celebration of holy Eucharist, in which among other Laudato Si responses, the Archbishop also launched a “Plant a tree campaign” where representatives from each diocese were given a tree to go rollout the “tree planting Campaign” in their respective dioceses, deaneries and parishes till it reaches households in small Christian communities. He later planted a tree together with the Caritas staff at Village which was the venue of the meeting.

In his homily, Archbishop Alex took some time on the gospel of creation and challenged Caritas Staff to think outside the box, rethink on the use and abuse of our God-given resources as they listen to the cry of the earth and cry of the poor. 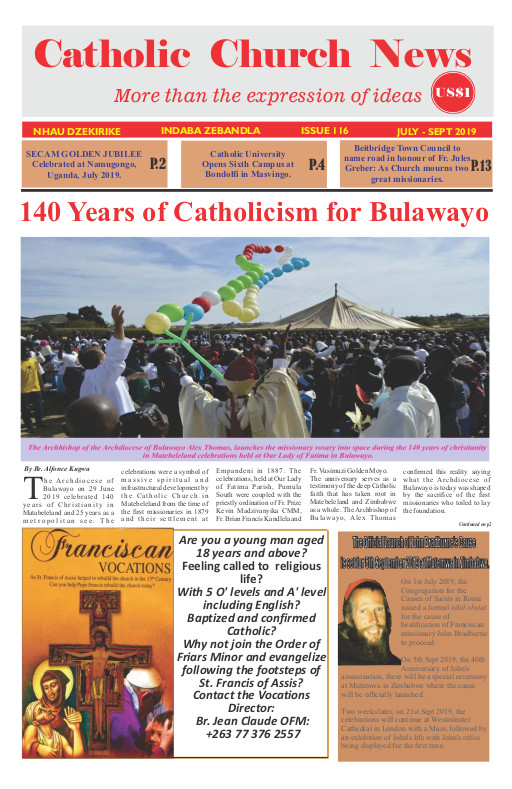